During a performance at the legendary Glastonbury Festival on 30 June, Kylie Minogue handed out 1,500 red roses to the public. LM Flower Fashion Productions was approached directly by the pop star with the request to realize a special moment with red roses during her performance. The Red Naomi! ® roses from Aleia Roses were selected. During the song “Where The Wild Roses Grow”, a duet with Nick Cave, Kylie asked her audience to pass on the love by giving each other a red rose. The artist handed over the first rose and this started "the wave" of red roses.

The song “Where The Wild Roses Grow” that Kylie sang during the Glastonbury performance became extra special because of the hundreds of red roses from Aleia Roses that the singer handed out to the audience to thank them for their support and to pass on symbolically the love. The contacts and the organisation were in the hands of LM Flower Fashion Productions. This performance at Glastonbury Festival was also very special because Kylie would initially perform in 2005 at the popular festival. But then she learned she suffered from breast cancer and canceled Glastonbury. "It has been fourteen years since I was supposed to perform at Glastonbury," says Kylie. “A lot has happened in the meantime. I could not wait to see you all again and share my special show with you”.

With her recently released greatest hits cd "Step Back In Time" she gave a great show. Kylie Minogue has built a successful career in the music scene since 1987. It is not only the hits "I Should Be So Lucky", "Better The Devil You Know", "Spinning Around" and "Can't Get You Out Of My Head" that made her world famous; over the past two decades, she has also became a successful fashion icon, designer, entrepreneur, actress and philanthropist.

The Glastonbury Festival in England is a large open-air music festival founded in 1970 by organiser Michael Eavis. The popular festival is mainly known for its rock and pop concerts, but there are also dance, cabaret, circus and other performances. Today the festival is still organised by Eavis. Apart from technicians and security staff, all festival staff are volunteers. They are "paid" by means of a free access card. The profits that the festival makes are donated to charities. This year Miley Cyrus, The Cure, Hozier, Bastille, The Killers, Liam Gallagher, Sheryl Crow and Janet Jackson performed. Kylie Minogue played the so-called "legend slot" on Sunday afternoon that is reserved for major artists. All 120,000 entrance tickets for this year's 36th edition of Glastonbury were sold out within half an hour.

Aleia Roses specialises in the large-scale cultivation of the Red Naomi! ® variety, the best red rose in the world. Aleia Roses grows the red roses in a high-tech greenhouse in the north of Spain in the province of Soria. This location has many climate benefits that contributes to the quality of the rose. And is therefore of high class. The production is almost biological and sustainable. Rainwater is collected in 25,000 m3 basins and reused, diseases and pests are controlled with a biological control program (Integrated Pest Management) and Dutch growers, knowledge and high-tech applications are applied to make the production process as efficient and sustainable as possible.

Aleia Roses has been acknowledged with various sustainability certificates issued by Milieu Project Sierteelt (MPS). Within the area of this kind, the greenhouse of Aleia Roses is the largest in Europe: it covers near 15 hectares. The rose distinguishes itself from other growers by the intense red colour, a subtle sweet scent, beautiful design and a vase life of 15 days or more. The stem of the flower can grow up to 90 cm long.

Styling the flowers in the Royal Albert Hall in 2016 for the Kylie Christmas concerts was a very special collaboration. The atmosphere of the world famous and one of the world's most beautiful concert halls was impressive. Last year LM Flower Fashion Productions styled the flowers for Kylie's 50th birthday in London's Chiltern Firehouse. 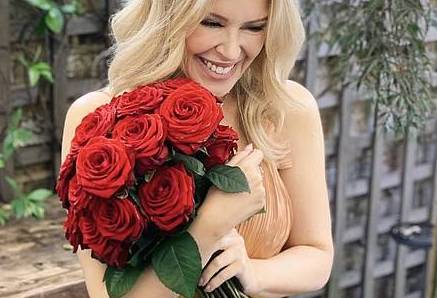