There is a new kid on the block and the initial impressions are very good. The Ascot Spring Garden Show opened its doors for the first time on Friday April 13th, an auspicious date, but one which did not bring any noticeable bad luck. Planned and designed by Stephen Bennett, the former Shows Director for the RHS, this is an event for the gardening enthusiast, where plants take centre stage.

With the imposing buildings of the historic Ascot Racecourse as the backdrop, everything about this show struck a good note. The railway station is nearby, road links are good and the parking is free, easy to use and just over the road from the show (so you don't have far to carry all the plants you just had to buy). The Racecourse staff are used to large events, so they are friendly and helpful, and the catering is superb - and interesting. By far the most popular stand on the overcast and chilly opening day was the one selling cheese on toast.

The Show has everything a keen gardener could wish for: 33 plant nurseries with plants for sale, 58 garden-related trade stands, six show gardens (curated by leading garden designer Andrew Fisher Tomlin) and six further gardens created by horticultural students from Capel Manor College, Pershore College, Shuttleworth College, Writtle University College, Myerscough College and Reaseheath College competing in TV gardener David Domoney's Young Gardener of the Year Competition. These student gardens have been judged for the competition and the group from Capel Manor College (Below), Enfield were awarded both a Gold Medal and Best in Show. Visitors to the Show can also cast their votes all weekend for their favourite garden in both sections and it will be interesting to see which the public prefer. 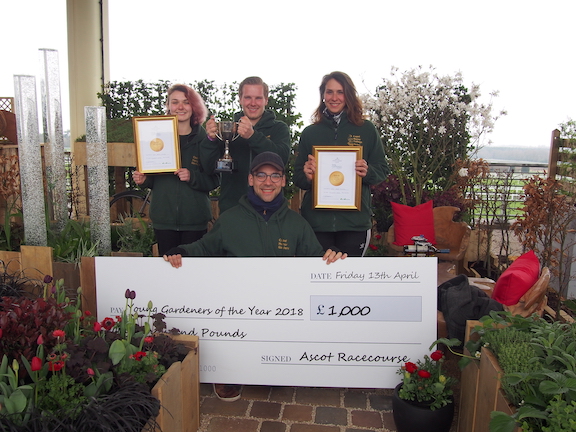 Given the dreadful weather this spring, this Show benefitted from the permanent pathways in the outdoors area, but a covered area in the stands meant that even if it had been raining, there would have been shelter.

Talks and demonstrations being held in the Talks Theatre were broadcast onto large screens outside, so there was no need to stop shopping unless you wanted a sit down. The talks and demonstrations over the weekend included top floral decorator Simon Lycett creating beautiful springtime displays, David Domoney confiding his Confessions of a TV gardener, Pippa Greenwood talking Gorgeous Vegetables and horticultural experts from nearby Savill Garden, John Anderson and Harvey Stephens, talking about plants for the spring garden.

The Ascot Spring Garden Show is supporting Thames Hospice, who not only receive a percentage of the ticket price, but also any donations made to the plant crčche they are running and any profits from the shop they were hosting.

If you can get to Ascot over the weekend of April 13 - 15th, this Show is well worth a visit, but the organisers have already announced that it will return on the same weekend next year. Booking ahead also gives access to a joint trip to both the Show and to a tour of Savill Garden with one of their experts. This beautiful garden looks spectacular in spring when its collection of Rhododendrons and Azaleas flower. 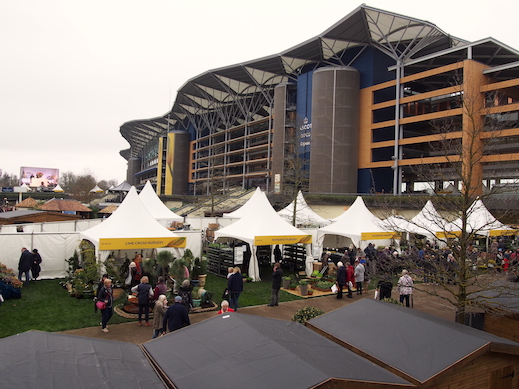