Pyramid made of roses breaks record

Counting 546,364 roses, Guinness World Records certified that the town of Tabacundo, located in the canton of Pedro Moncayo —one hour away from Quito— managed to create the largest flower arrangement in the world.

Since June 30, in the middle of a square of that Ecuadorian town, the construction of an impressive pyramid of red roses with a border made of white roses on the top level and a dazzling sun of yellow roses in the middle was carried out. The pyramid was originally intended to be an exact copy of an indigenous structure located a few kilometers away in a pre-Hispanic ceremonial site.

The initial construction had an area of 180 square meters, but it was modified expanding its access ramp to 70 meters and increasing its size to 420 square meters.

The gigantic flower arrangement was a proposal agreed on between municipal authorities and rose growers with the objective of showing to the world the place where these beautiful Ecuadorian flowers come from.

The roses were donated by particular growers who are part of the Flower Growers Corporation of Tabacundo, and the work was in charge of specialists and hundreds of enthusiastic citizens. A drip irrigation system was installed to keep the stems hydrated and afterwards the roses used in the construction of the pyramid were used for the preparation of fertilizer. 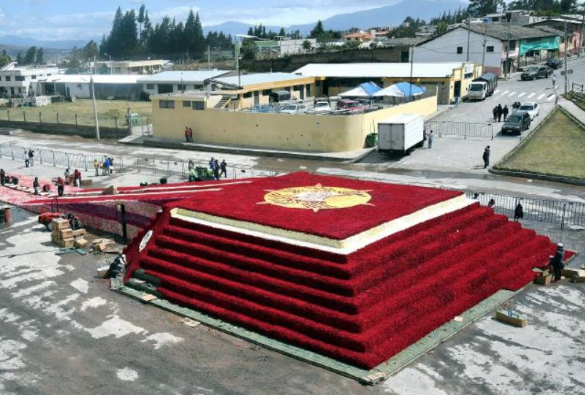